“Every conductor and soloist knows how essential a good mentor is, and it’s no different for orchestra members and leaders”

Our mentors are both exceptional musicians and experienced teachers. They make up the core artistic team of LEAD!, and aim to pass on their knowledge and experience in helping aspiring orchestra leaders to master the unique skills required of them. 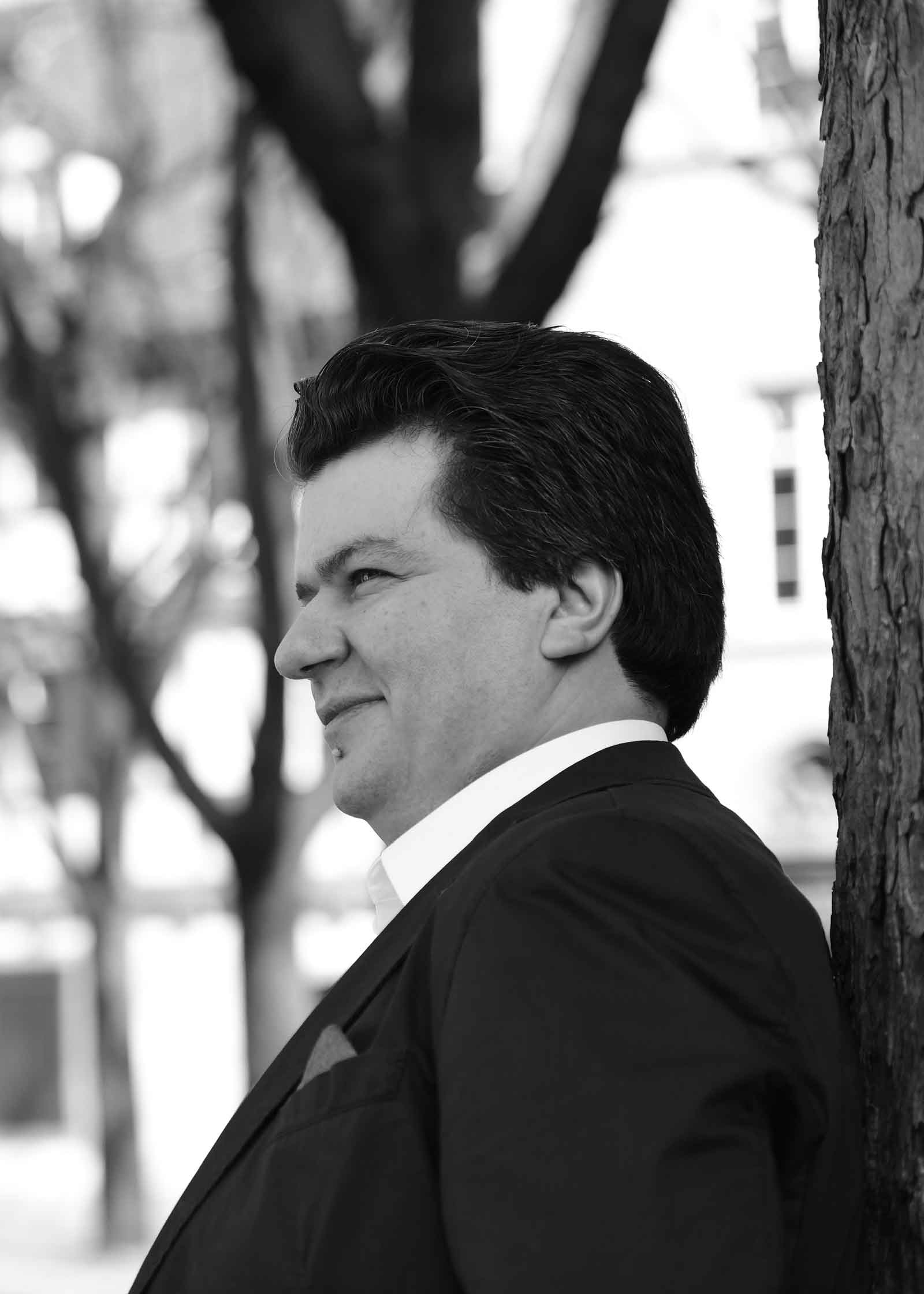 Alexander Zemtsov has achieved recognition as a soloist, conductor, chamber musician and teacher. He has been performing as a solo violist since the age of fifteen, appearing with orchestras across Europe, the USA, Asia and Australia, and has performed as a soloist with Neeme Jarvi, Vladimir Jurowski, Leif Segerstam and Alexander Vedernikov. At the age of 23 he was appointed Principal Viola of the London Philharmonic Orchestra. In 2012 he left to dedicate himself entirely to his career as soloist, conductor, chamber musician and teacher.

Born in 1978 into a family of musicians, he attended the Gnessin Music School for gifted children in Moscow, where he studied with Elena Ozol. He continued his education with Michael Kugel in the Hoogeschool, Maastricht and with Tabea Zimmermann at the Hochschule Hanns Eisler, Berlin.

He is Principal Conductor of the International New Symphony Orchestra (INSO) Lviv, and has appeared as conductor and soloist with the Lappeenranta Orchestra, and the Sinfonia Finlandia, Jyväskylä. He has conducted the Bulgarian National Radio-Symphony Orchestra, the Mannheim Chamber Orchestra, and Tchaikovsky’s ballet The Nutcracker at the Rijeka Opera Theatre, Croatia. He has toured Europe and made recordings on Toccata Classics with INSO Lviv.

He won first prize at the ‘Classical Legacy’ International Competition, Moscow, the Elise Meyer competition, Hamburg, and at the Eighth Brahms Competition, Poertschach. As a chamber musician he has performed in the world’s most prestigious venues with partners such as Peter Donohoe, Patrick Gallois, Itamar Golan, Natalia Gutman, Misha Maisky. Gerhard Schulz and Dmitri Sitkovetsky. His recordings as a violist have appeared on the Chandos, LPO Live, Navis Classics and Naxos and Toccata Classics labels.

Alexander Zemtsov has held professorships at the Guildhall School of Music and Drama in London and the Vienna Konservatorium. He is currently professor at the Haute École de Musique, Lausanne, and the Hochschule für Musik und Tanz, Cologne. 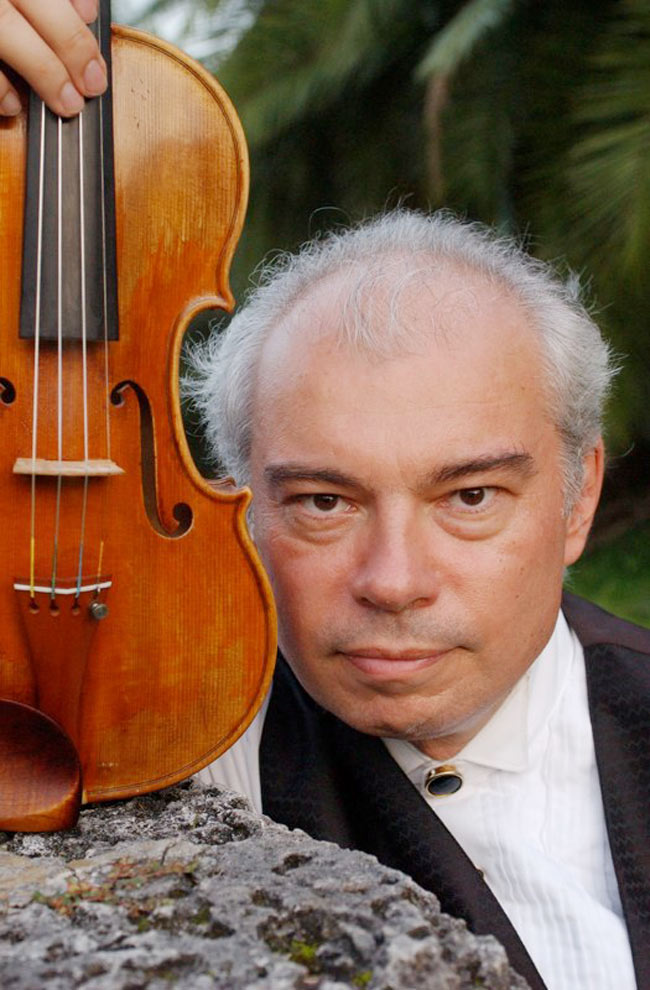 Igor Gruppman’s exceptional career successfully spans a number of artistic fields. Critically acclaimed for his depth of interpretation and sensitive musicianship, he enjoys a multi-faceted career as conductor, violin soloist, and orchestra leader.

As the leader of the Rotterdam Philharmonic Orchestra and a frequent guest leader of orchestras such as the London Symphony Orchestra, the Royal Philharmonic Orchestra, and the Academy of St. Martin in the Fields, Mr. Gruppman has collaborated with some of the most esteemed conductors of his generation including Solti, Gergiev, Rostropovich, Colin Davis, Rattle, Haitink and Nézet-Séguin.

Igor Gruppman has conducted the Rotterdam Philharmonic Orchestra, the Mariinsky Orchestra, the Orquesta Classica Santa Cecilia and the Orquesta Classica da Madeira. In 2016 he made his debut at the Patras International Music Festival, Greece. He currently has a four-year residency at the Woodstock Mozart Festival, where he appears as a conductor, and as a soloist together with his wife, Vesna Stefanovic Gruppman.

Igor Gruppman holds the post of Principal Conductor of the Orchestra at Temple Square, Salt Lake City. In Asia, he has appeared several times as conductor and soloist with the Seoul Philharmonic Orchestra.

As a soloist, Mr. Gruppman is critically acclaimed for his “rich and beautiful tone, elegant phrasing, drive, passion and virtuosity.” (Strad Magazine) His solo recordings on the Naxos, Koch and Biddulph labels have also been highly praised.

Mr. Gruppman is a graduate of the Moscow Conservatory, where he studied with Leonid Kogan and Mstislav Rostropovich, followed by studies with Jascha Heifetz in Los Angeles. He is now on the faculty of the Rotterdam Conservatory. Igor and Vesna Gruppman co-founded the Gruppman International Violin Institute in 2002 to select, train and develop the careers of exceptionally gifted violinists around the world. 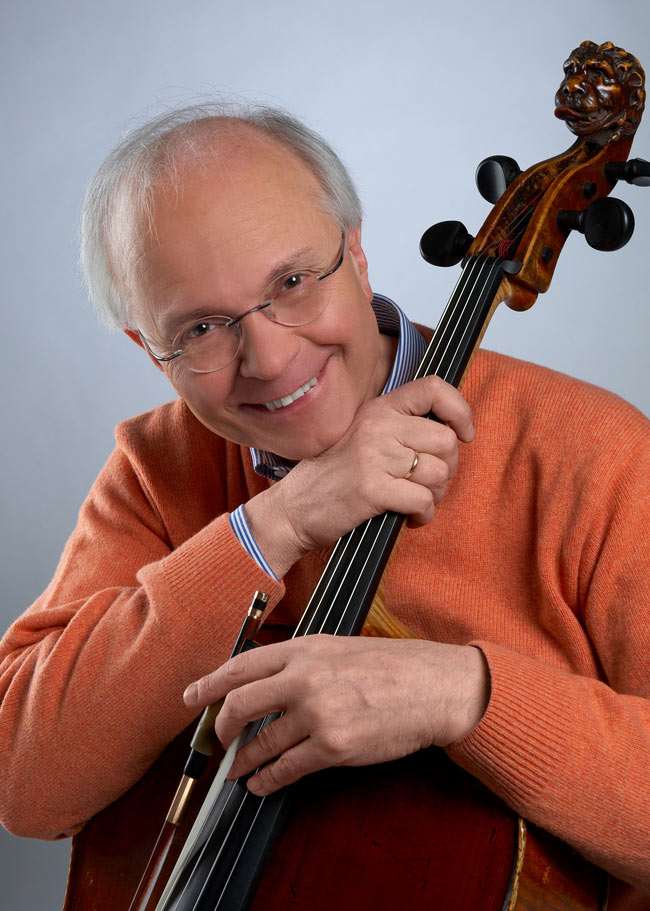 Franz Bartolomey was born in Vienna, and studied with Professors Richard Krotschak and Emanuel Brabec. He has been awarded numerous prizes at competitions in Budapest, Moscow and Vienna.

He was the Principal Cellist of the Vienna Philharmonic Orchestra until 2012, his family having been members of that orchestra for three generations: his grandfather was the solo clarinetist and his father a violinist.

Franz Bartolomey is active internationally as a soloist and chamber musician as a member of “Wiener Virtuosen”. He has played as a soloist under Leonard Bernstein, James Levine, Daniel Barenboim, André Previn, Bernhard Haitink, Zubin Mehta, Mariss Jansons and Simon Rattle, among others.

Franz Bartolomey regularly gives international master classes, which form an important part of his life. He was brought up in the best Viennese music tradition, and wishes to share his experiences of the Wiener Klangstil. His activities include a wide range of styles, from baroque and classical to contemporary music. He also teaches chamber music and provides training in orchestral pieces.

Bartolomey’s work has been documented by television and radio broadcasts (notably his recording of Richard Strauss’ Don Quixote with André Previn and the Vienna Philharmonic Orchestra for TELARC). He has also recorded for Naxos and BMG.

From 2004-2006 Franz Bartolomey was Principal Cellist of the Lucerne Festival Orchestra under Claudio Abbado. He has been honoured with the “Große Silbernen Ehrenzeichen für Verdienste um die Republik Österreich”.

In 2012 the “Ehrenring of the Vienna State Opera House” was conferred on him.

His book Was zählt, ist der Augenblick, about the Bartolomey family’s 120 year history at the Vienna State Opera, was published by Amalthea, Vienna, in 2012. 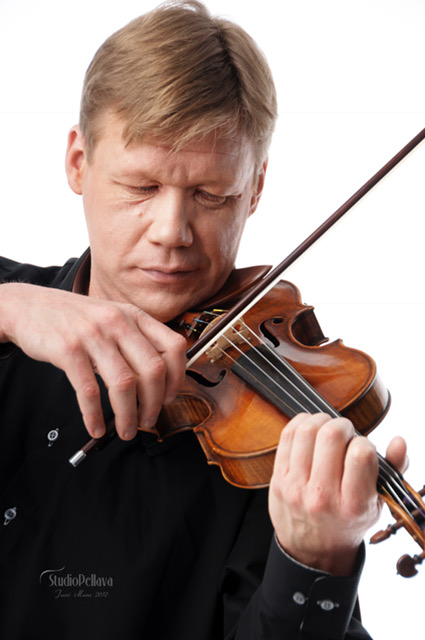 Tero Latvala began playing the violin at the age of 7 and studied at the Sibelius-Academy with Leena Siukonen-Penttilä, Ari Angervo, Aleksander Vinnitsky and Tuomas Haapanen.

He has gained extensive experience as a concertmaster working regularly with renown orchestras such as the Helsinki Philharmonic Orchestra, Finnish National Opera, Tapiola Sinfonietta, Tampere Philharmonic, Sinfonia Lahti, Turku Philharmonic and Lappeenranta City Orchestra. He has also gained recognition as an experienced soloist and chamber musician and has performed in Finland and abroad in different chamber formations.

Tero Latvala’s career as a violin teacher began as an instructor at the Sibelius Academy in 2005. Currently, Latvala is a full-time lecturer in violin and orchestral training at the University of the Arts, Helsinki. In addition, he works as a violin mentor together with Jukka-Pekka Saraste for both the Jean Sibelius Youth Orchestra and the Finnish Chamber Youth Academy. 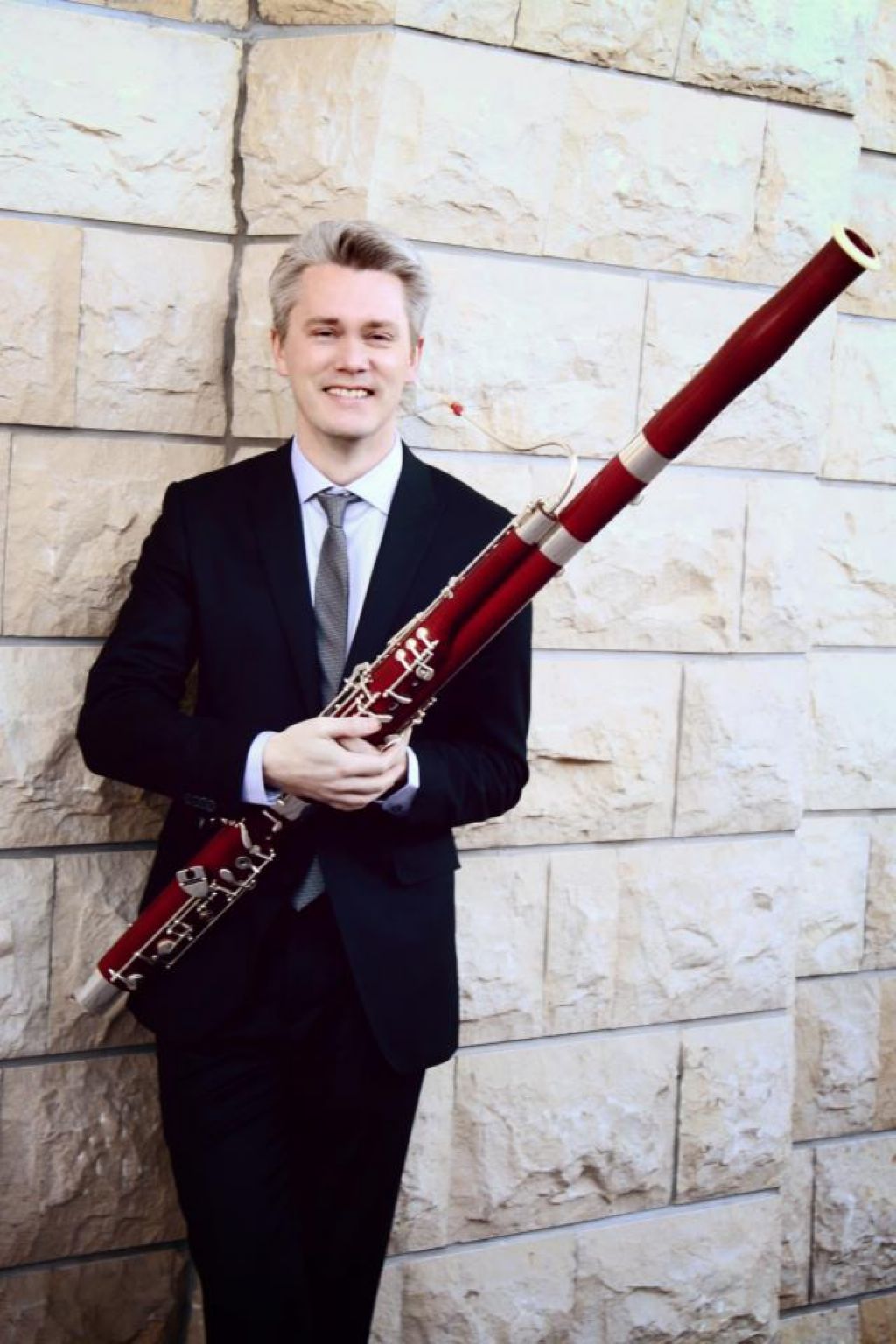 Ole Kristian Dahl (Trondheim, Norway) is currently professor at the Staatliche Hochschule für Musik und Darstellende Kunst – Mannheim. He began playing bassoon at the age of twelve, and at sixteen began studying with Robert Rønnes at the University of Stavanger (Norway). He continued his studies at the Conservatoire Superieur de Musique – Genève (Switzerland) with Professor Roger Birnstingl where he won first prize at the CIEN Riddes Schweiz competition in 1998. In the same year he won his first job as solo bassoon in the Malaysian Philharmonic in Kuala Lumpur, and completed his studies in Geneva. During his time in Malaysia, Ole continued his studies at the Hochschule für Musik, Theater, und Medien – Hannover (Germany) with Professor Dag Jensen.

In 2000, Ole won the solo bassoon job in the Danish National Radio Symphony Orchestra in Copenhagen (Denmark), and in 2002 won the same
position in WDR Symphony Orchestra – Cologne (West Deutsche Rundfunk Sinfonieorchester – Köln). Since 2016 Has Ole been acting solo bassoon in the Swedish National Orchestra: Gothenburg Symphony. In addition, he has played with the Berlin Philharmonic, Munich Philharmonic, NDR Hamburg, DSO Berlin, Chamber Orchestra of Europe, Oslo Philharmonic, and Norwegian Chamber Orchestra. He has also performed with the Linos Ensemble.

As a dedicated educator, Professor Dahl has taught at the Royal Danish Academy of Music in Copenhagen, Royal Academy of Music in Aarhus, Folkwang Universität in Essen, and in 2008 won the professorship at the Hochschule für Musik in Mannheim (Muho Mannheim) where he currently teaches as the successor of the renowned Professor Alfred Rinderspacher. Ole is Visiting Bassoon Professor at the Royal College of Music, London, since 2017. 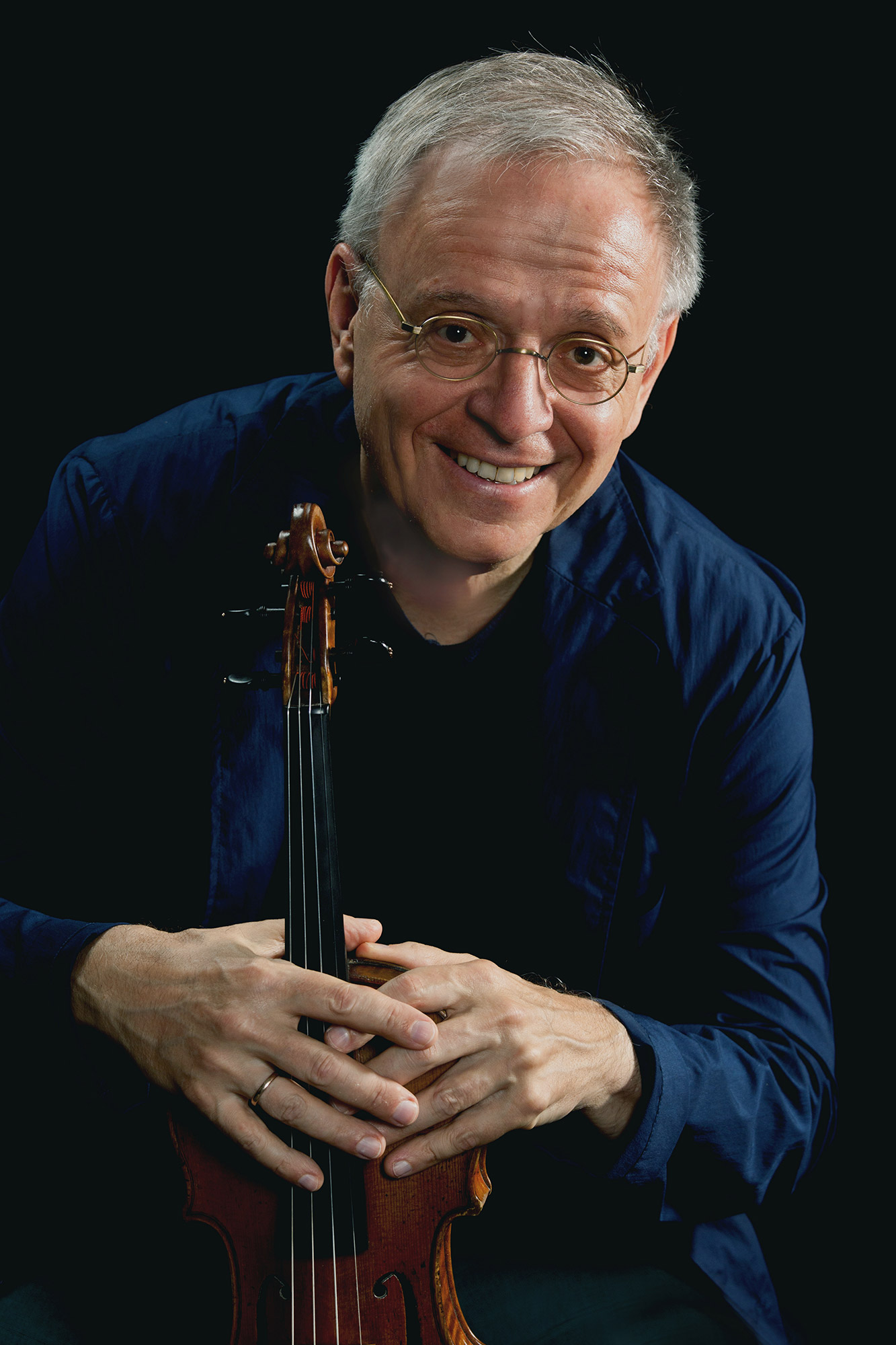 Born in Russia, Boris Garlitsky received his first music lessons from his father, the author of the standard textbook for young violinists, “Step by Step”. He studied with Professor Yankelevich at the Moscow Conservatory, and afterwards worked as the Concertmaster for the Moscow Virtuosi and the London Symphony Orchestra, the Covent Garden Opera, the Vienna ORF Orchestra, the Hamburg Philharmonic and many more. In 1982, he won the Italian Paganini Competition and began his career as a soloist. Since then, he has played, among others, with the London Philharmonic Orchestra, the Vienna Radio Orchestra, the Chamber Orchestra of Philadelphia as well as the Milan based Giuseppe Verdi Orchestra and the British Orchestra of the Age of Enlightenment.

Boris Garlitsky is an active participator in several international music festivals. He regularly takes part in the Pablo Casals Festival in France, Mostly Mozart in New York, the London Proms, the Schleswig-Holstein Music Festival and Gidon Kremer’s Chamber Music Festival at Lockenhaus in Austria. Also, he performs for the BBC, Radio France as well as a number of radio stations in Italy, Russia and the United States. He has recorded for RCA, Naxos, Chandos and Polymnie.
Boris Garlitsky is an outstanding chamber musician and member of the Hermitage String Trio. He regularly works with musical partners such as Pinchas Zuckerman, Gidon Kremer, Marta Argerich, Anne-Sophie Mutter, Vadim Repin, Truls Mork and Maria-Joao Pires among others.

Today, Mr Garlitsky devotes a large amount of his time to education. He holds a chair at two leading music Institutes, the Conservatoire National Supérieur de Paris and the Folkwang Universität der Künste, Essen (Germany). In addition every year he offers master classes at the most renowned music institutions including the Curtis Institute in Philadelphia, the Peabody Conservatory in Baltimore, Hanns Eisler Musikhochschule in Berlin and Kronberg Academy.

Fiskars provides the backdrop for a new summer festival and provides a base for Lead! Foundation’s Mentorship Programme